This page is about the mural project that took place at St. Thomas Aquinas from March 2 - 6, 2015.

The idea behind this project is based on Anishinaabewin: using Indigenous Knowledge for the future.  Based on an Ojibway story, Jiignong Aadsookan ~The Sacred Fisher Story, students and teachers learned about the importance of Indigenous Knowledge, and how that understanding can provide insight and answers to today's issues pertaining to environmental sustainability, contributing factors to climate change, destruction of the earth, and the role students can take to become active in creating positive change.

The week-long project began with an opening ceremony conducted by Nancy Rowe from New Credit First Nation and Maurice Switzer from Alderville First Nation.  Students had the honour of witnessing two women who travelled with Nancy to present Métis artist Christi Belcourt with moccasin vamps that will be later joined with 1800 other pairs of vamps that are apart of a national campaign called Walking With Our Sisters – a national effort to address the growing number of missing and murdered indigenous women across Canada. Hearing the woman share about the murder of their cousin one year ago was a moving experience for all. Following the opening ceremony, Isaac Murdoch from Serpent River First Nation, told the Sacred Fisher Story, upon which the mural is based.

Students, staff and community worked tirelessly from 8am to 11pm in order to complete the 4-panel mural in just four days!  At the end of the week, we had an unveiling ceremony that included invited guests from our Board and other boards, Ministry of Education and various media outlets.  We were honoured to have Peter Schuler from New Credit First Nation conduct the ceremony as well as MaryLou Smoke from Batchewana First Nation and Dan Smoke from the Seneca Nation to also speak at our unveiling ceremony.

Overall, it was an incredible experience for everyone involved. The message was clear: we are in a sacred story right now! The earth is in trouble and needs our help.  How our story ends will depend on what role we will play. Will you be a hero or a villain?
How the project began:
I teach an Alternative Education Program along with another teacher and we had changed rooms at the beginning of the semester.  The walls were very bare and I thought it would be nice to paint something to liven the room up.  In the beginning of the semester, Isaac Murdoch from Serpent River First Nation was at our school presenting in classes on different topics pertaining to his history and culture.  While in our class, he told the Fisher Story (there is actually a part 2 as well!) and when he was finished, the students said, "Let's paint that on the wall!".  After Isaac left to go back up north, we spoke over the phone about how we could paint the story. During that time, Isaac had contacted Christi Belcourt and told her about what we were planning to do and why.  Christi said that she wanted to help and suggested we do a mural....a really big mural, but in pieces so that it could travel...and so it began!

Preparing for the project:
Now that this project was going to be much larger than originally planned, I wanted to get as many people involved as possible.  I sent out an email to my school staff and explained the project.  I arranged for Isaac Murdoch to come down the week before we started painting so that he could speak to classes that couldn't paint, but wanted to hear the message and do something with their class.  Also, while he was down the week before, he spoke to 60 elementary teachers at a PD session they attended through our board.
With the help of students, we created a promo video to show classes to get students excited and inspired about the project and the very important message.  The video (see below) highlighted Josephine Mandamin and the Water Walks she has been doing since 2003 as a way to show how easy it is to get involved and create an impact on others to do the same. We also wanted to raise awareness about our water and celebrate the amazing work First Nations people have doing protect our environment.

Our flyer we used prior to beginning the project 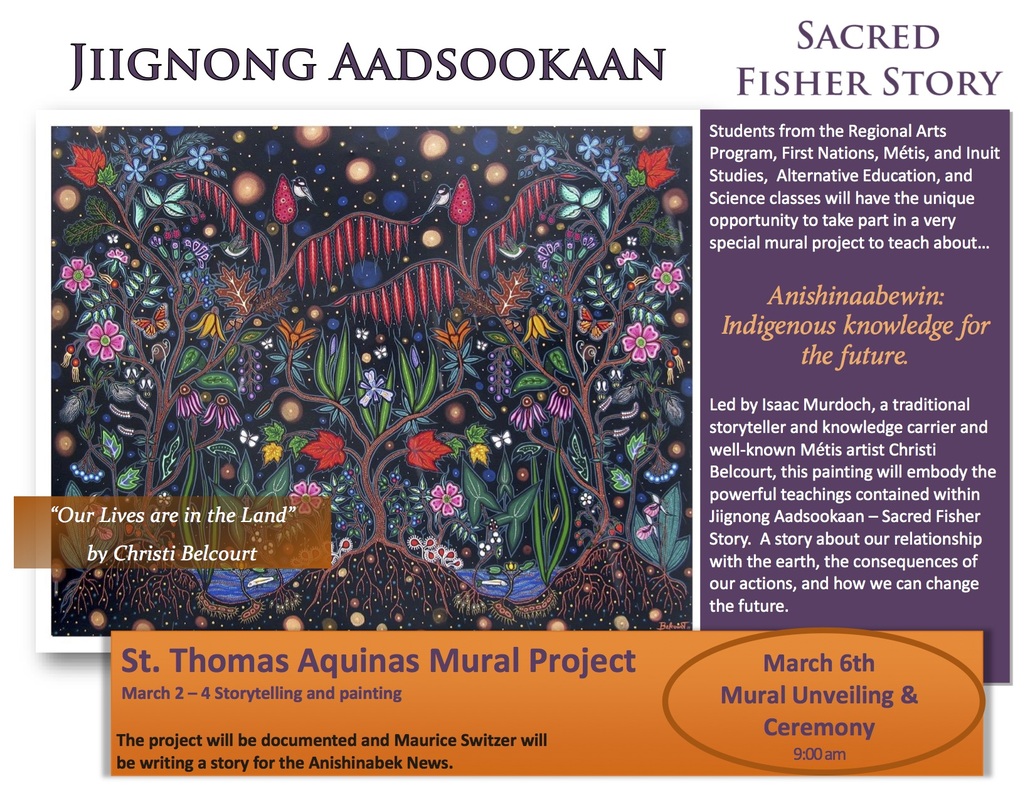 Prior to our mural project, this video was shown to inspire students to take action and get involved!

9:00am Unveiling of Mural & Ceremony (library)
Students will be presenting the mural and sharing about their learnings throughout the project
Students will be drumming & video presentation to highlight the project
Dish With One Spoon wampum belt teachings will be shared with respect to sustainable living & actions that will be taken moving forward
Special Guests:
*Isaac Murdoch from Serpent River First Nation
*Christi Belcourt Metis Artist
*Pete Shuler from Mississaugas of New Credit First Nation (to honour the traditional territory we are on)
*Maurice Switzer from Mississaugas of Alderville First Nation (Anishinabek News)
*Dan & MaryLou Smoke
*School board representatives
*Colinda Clyne from Upper Grand District School Board
*Local media outlets & APTN